10 of the best sherry cask whiskies for beginners to try

Just starting out on your journey through the world of Scotch or simply want to expand your knowledge about the use of wood in maturing whisky? Our guide to some of the best sherry cask whiskies for beginners might help.

The Sherry and Scotch industries have had a somewhat symbiotic relationship for centuries and casks have been used by both industries in both Spain and Scotland with both drinks benefiting from these wonderful wooden barrels.

Helping to smooth out the character of the spirit and giving it a far richer, fruitier character, these sherry casks arrived in the ports of Glasgow and Leith in vast quantities and were readily available until the 1950s when legislation in Spain changed the way Bodegas distributed the drink. Wood plays a huge part in the final flavour of the whisky. Picture: Shutterstock

Now, becoming harder and harder to source and still very much in demand, several of Scotland's most prominent distilleries have made their name on sherry cask matured whisky and you'd be hard pressed to find a whisky fan you didn't have a favourite example of this popular maturation style.

A perfect example would be the American obsession with Macallan.

So, to help you get started on your road to sherry head nirvana, we've picked out eight examples, which are reasonably priced and should be easy to get a hold of.

Just remember, this is only the tip of the iceberg, so don't come crying to us when you're getting into trouble from your SOs or families for spending way to much time and money in pursuit of your next sublime sherry cask hit.

10 of the best sherry cask whiskies for beginners to try Outwith Macallan and Aberlour, this is definitely the distillery sitting upon the sherry cask throne (we kind of want a sherry cask seat now) with a range of expressions that have really grabbed whisky fans attentions over the past 5 or 6 years.

In the 12-year-old we have a stunning example of what is capable of being produced when smaller distilleries give the bigger guys a run for their money.

Created using a combination of Spanish Pedro Ximenez and Oloroso sherry casks it gets the balance between distillery character and cask influence just right, producing an example of the style that, as the oft quoted Goldilocks would say, is "just right". The first thing to get out of the way here is the pronunciation.

Auchentoshan is pronounced Och (as in loch) - en - toshan and this little lowlands Distillery easily holds its own against some of its northern neighbours.

This is a great dram if you haven't tried much Scotch single malts as its lighter due to its triple distillation. The Three Wood refers to its triple maturation, with bourbon casks, then Oloroso and Pedro Ximénez casks being used to give it a light fruity character with hidden depth. More famous for their excellent cask finishing techniques, the doublewood sees malt master (and all round good guy) David Stewart taking the technique he helped pioneer and using it to finish a Balvenie whisky - that had began its maturation life in an ex Bourbon barrel - in a sherry cask to give it a rounder fruitier flavour.

Highly accessible, its probably the most ubiquitous of the Balvenie range, and for good reason - it's an absolute cracker and one you'll return to again and again. Aberlour's A'Bunadh (which is Gaelic for 'of the origin' or 'the original') is a sherry monster that has been matured exclusively in Spanish Oloroso sherry butts, and despite its recent jump in price, it remains a true cult classic,

Careful though, at cask strength it is dangerously drinkable and may, depending on your sensibilities, require a touch of water when drinking (we like it neat, but then we are whisky snobs).

The whisky itself is all spiced orange and dried fruits on the nose, with a lovely, rich finish filled with those spiced orange notes coupled with dark chocolate and cream.

The geekier among you will have noticed that it's available in different batches, meaning that every bottle from each batch will offer something different.

• READ MORE: 10 of the best Scotch whiskies for beginners We are big fans of Richard Patterson's work and could have chosen two other expressions from Dalmore for this list (the King Alexander III and the cigar malt) but in our heart of hearts we would have known we should have chosen the 15-year-old.

The perfect autumn and winter dram, the 15-year-old is a rich, no-nonsense blast of toffee and rich fruits.

The 15 spends 12 years in ex-Bourbon casks before being finished in Matusalem, Apostoles and Amoroso sherry casks, making it a complex dram that will keep you warm on these long, dark nights and at just over £50 it won't break the bank. The product of 'can-dhu spirit' (not our pun, but theirs) the Tamdhu batch strength is a hugely popular addition to Scotland's sherried whisky stable.

The revitalised distillery created this expression using a selection of sherry casks and the result is a punchy 57.8% abv that has been winning rave reviews and awards in competitions around the globe.

For us though, it's just a fantastically uncomplicated dram that is two parts orange marmalade and one part face slapping goodness. Drink it neat or add a few drops of water and see this little whisky really open up. Pronounced dal - yoo - an, this is one of our favourite oft-overlooked whiskies, though we were first introduced to it in a Bourbon cask expression - which is also a cracker - the Flora and Fauna is a punchy beast that makes us go weak at the knees.

Dark chocolate, sweet fruits and even a little spice, it's a whisky that will challenge your taste buds in the most delightful way. Be warned, at 60% abv it's dangerously drinkable - perhaps it's one best kept for an enjoyable night cap or two to avoid ending up leg drunk in your local.

As it's cask strength, try adding a little water to really open it up and explore its depth. 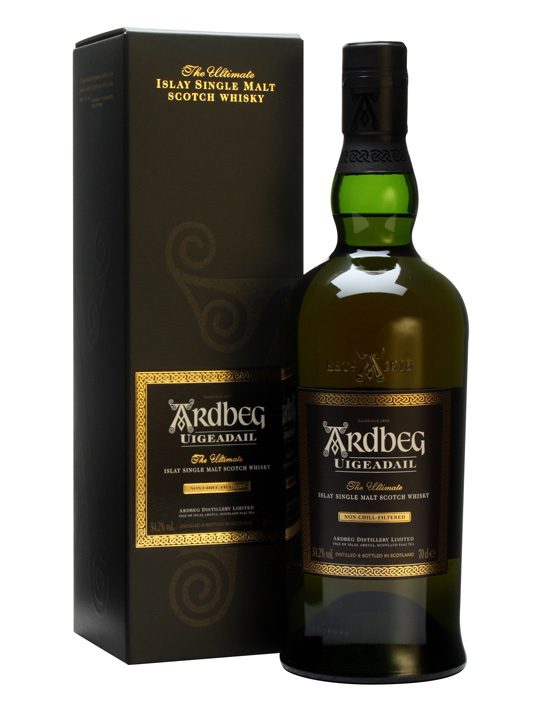 Sherry casks don't all have to be sweetness and light in fact, some of the best examples happen to be sherry and peat monsters. Ask anyone what their favourite (reasonably priced) Ardbeg is and chances are - if it's not the old 17-year-old - they'll say this.

Pronounced ‘Oog-a-dal’, this expression is named after the loch from which all Ardbeg water flows, and is widely considered to be one of the best value drams in the distillery's core range.

Those of you who think they don't like peat don't be put off, its bark (the nose, which is all smoke and brine) is worse than its bite (those sherried Christmas cake notes take precedence on the tongue and bring a real depth and complexity to the finish). We had to finish with another trip to Islay, and Bowmore, an underrated distillery that deserves a little more love.

The Darkest is a luxurious dram that really manages to balance peat smoke with summer fruits in a way that is subtler, but no less enjoyable for it, than the Ardbeg Uigeadail, it's the perfect pudding for any Christmas feast and great value at the perfectly reasonable price it's available at.