Visiting Edinburgh and like steak? You should definitely try some of these restaurants.

Our carnivorous love affair with great steak is well-documented. After all, Scotland is home to the Aberdeen angus, a cut of beef loved the world over.

Edinburgh is home to some of the best steak offerings in the country, with beautifully prepared beef from all over the world creating a meat-lovers heaven in the capital.

Here are what we think are then of the best Steak restaurants in Edinburgh that you should definitely try: In Argentina, steak is a religion, and that is abundantly clear here with little attention paid to anything else - a cowhide plastered on the wall is as far as the decoration goes

Table-sized portions of rump, sirloin, ribeye and fillet are served up with small pots of chimichurri on every table an essential addition to whichever cut you go for. South African-inspired Shebeen has three restaurants dotted around the capital, all of which are well worth visiting.

Steaks are offered in two sizes; cheetah - a leaner, lighter option for those with a more delicate appetite - and lion - which, as Shebeen claim, is “enough to fill you to bursting point.”

Only the most tender cuts of rump, sirloin, ribeye and t-bone are served up from locally sourced farms, with most expertly prepared on the bone.

Diners can also plump for a serving of traditional monkey gland sauce - sadly containing an absence of monkey gland - or the spicy chakalaka relish. Describing itself as “Edinburgh’s first gourmet steak restaurant,” Kyloe only serves the best Scottish beef dry aged for a minimum of 28 days.

Located on the first floor of the Rutland Hotel and with excellent views of Edinburgh castle, diners can sit back in cowhide-upholstered booths and tuck into some of the finest cuts of beef the capital has to offer.

Sharers including an enormous 28oz porterhouse are on the menu, but the individual cuts of rump, sirloin and a 60-day aged ribeye are just as good. The meteoric rise of the Chop House’s popularity led to it opening a second eatery inside the Arches on Market Street, however as the Constitution Street version is the original, that’s what we’re going with.

Here, all steaks come from three specially selected, artisan suppliers and are dry aged for a minimum of 35 days before they reach the restaurant. Once they enter the kitchen, they’re cooked over an open-flamed charcoal grill for that extra bit of flavour.

Diners can customise their cut with a range of decadent sauces, but the sides are what make the Chop House really stand out. Choose from everything including kimchi, mac and cheese cabbage and bacon or baked beans with smoked pork belly for that extra piece of meaty goodness. The intimate Wildfire on Rose Street isn’t a steak-specific restaurant - they also have a very good seafood menu - but the meat here is so good, it warranted a place on the list.

Succulent 21-day aged cuts of Aberdeen angus sirloin, ribeye and fillet are served up with either a mouthwatering blue cheese or peppercorn sauce and a healthy portion of thick, steak-cut fries.

It pays to book ahead here though.

There are few seats in a petite setting and, as the menu suggests, they usually fill up pretty quickly. Has there ever been a more appropriately named restaurant than Steak?

Probably not, and although there are a few non-meat options on the menu, cuts of beef are very much a way of life here, with a range of 21-35 day aged cuts of sirloin, fillet, ribeye or t-bone there to satisfy diners carnivorous cravings.

What sets Steak apart from the rest however is their innovative lava stone serving solution which allows diners to cook their steak to sizzling perfection before topping them off with inventive sides including duck eggs or king prawns. A smaller and slightly more intimate alternative to Los Argentinos, South American grill Rancho is excellent value for money compared to some of the more central options.

The frequently-praised and knowledgeable staff will hand cut fillets of steak in front of customers to ensure perfect personalisation before serving them up for less than £20.

Cuts are topped with a mouthwatering combination of grilled or fried mushrooms and sauteed onions for that extra kick, in what might be one of the city’s best kept restaurant secrets. McKirdy’s is a steak restaurant for those who are serious about their meat, largely because those behind the counter fall into the same category.

The steakhouse is owned and run by the same family who own McKirdy’s butchers, which has been serving the city some of the finest cuts of beef since 1895.

Here, that knowledge goes a long way, as the award winning butchers plate up their favourite cuts, from the butcher’s special pounded rump to the fillet medallions layered with haggis and doused in a whisky sauce. 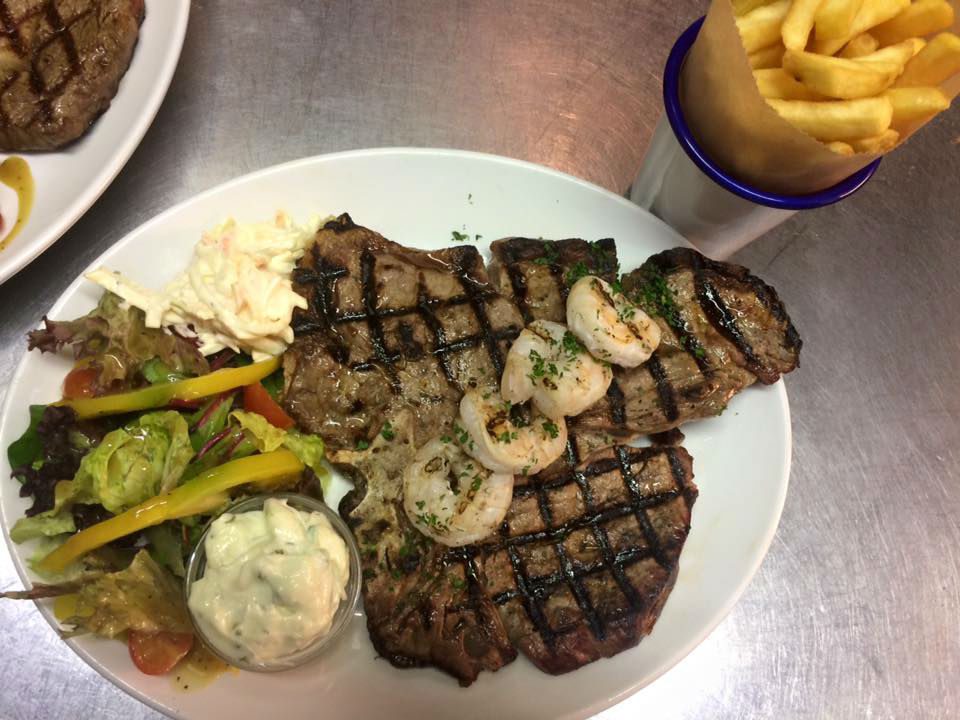 The understated texan steakhouse may have dropped ‘grill’ from its name, but there has been no reduction in quality since the rebrand.

As expected by the name, fresh cuts of buffalo, know for being a leaner alternative to beef, are served up for carnivores to get their teeth into.

Steaks are aged for 21 days before being cut to each diner’s specific liking, with teriyaki marinated versions an inventive alternative to the usual.

Marsala and wild mushroom and tarragon sauces are an excellent accompaniment to the beautifully prepared beef, while the surf ‘n’ turf also comes highly recommended. The exposed stone and retro styling inside Smoke Stack are a refreshing no-frills, no gimmicks alternative to other eateries.

In fact they proudly boast on their website, “Smoke Stack is not the place for food that looks like a work of art,” instead preferring to concentrate on serving only the finest cuts from the Scotch Beef Club, of which the are members.

All 21 day aged steaks come from the Club’s registered butchers and the knowledgeable staff are trained to advise on which cut to go for based on the customer’s individual tastes.