With winter approaching and the cold, dark nights drawing in, we've collected a selection of traditional Scottish winter recipes to warm you up.

More than a little used to cold, wet weather and long winters, the Scots have never been shy of using food, drink and a little humour to get us through.

From a cold busting hot toddy to a warm, filling Scottish broth, here are the traditional recipe ideas we love to enjoy with friends and family in the winter.

Perhaps the epitome of a traditional Scottish soup. The best seems to contain everything and anything, but two essential ingredients are mutton and barley.

Good Scotch broth should be more like a stew than a soup, with the kind of consistency that will "line your stomach" and warm you up on a cold autumn or winter's night. • 1 turnip, diced (or a swede which would be more traditionally used in Scotland)

• One splash of Scotch whisky (optional)

1 Place Lamb in a large pan and cover with water, place heat to around medium.

2 Dice the turnip, 1 of the carrots and the onions, grate the other 2 carrots and slice the leek.

3 When the pot is simmering add the above veg and skim off any froth as it cooks.

4 Rinse the barley and peas (post soak) and add to the pan together with the chopped parsley.

5 Leave to simmer for around 2-3 hours, remembering to stir occasionally and skim of fat and froth with a wooden spoon.

6 Add the salt and pepper.

7 Stir more often towards the end of cooking time as barley may stick to base of pan.

8 Remove the lamb 15mins from the end and let it cool a little before removing the meat from the bones. Discard the bones.

9 Cut the meat into small pieces and add to the soup.

10 Taste the soup, season with salt and pepper if necessary and serve.

One drink, regularly enjoyed across Scotland, that offers not only a little liquid hug in a glass, but also serves as the perfect antidote to a cold, is the traditional Scottish hot toddy.

Here we provide an easy - and delicious - recipe to make a classic Scottish hot toddy (with a slight flourish) for you to try out in the comfort of your own home.

Traditional recipe for a Hot Toddy 1 Cut the lemon in half then cut a 1/2 inch slice from one of the halves, put to one side.

2 Dust a plate with a thin coat of sugar, then rim the glass you intend to use with one of the halves of lemon to wet the rim with lemon juice. Then turn the glass upside down and place the rim into the sugar to dust the glass.

3 Pour the whisky into the glass, then add the honey.

4 Add the boiling water, obviously adding a larger amount will dilute the taste so we recommend 150ml, so the glass is only 3/4's full, but how much you wish to add is up to you.

5 Add a few cloves, then squeeze the juice from one half of the lemon into the glass and stir.

6 Optional - add a stick of cinnamon or some star anise for an extra hit of flavour.

7 Cut the lemon slice in half, adding one to the glass and using the other to garnish. Alternatively 'pin' several of the cloves to one of the half slices and add the slice at step 5.

A fantastic dish for all the family, keeping you full all day and warming you up when the weather is chilly.

It’s believed stovies originated from a time when masters would give their servants all the leftovers from Sunday lunch and this tasty dish would be made.

There are as many recipes for stovies as there are seasons in one day in Scotland, with many different people having their own version of this traditional recipe.

Some use left over cuts of beef and some use steak mince, others will use square sausage (slice), while some will use link.

Others still will use pork or lamb, it really will depend on the family/region/town [delete where applicable] the person hails from.

It's a fun recipe to experiment with so don't be afraid to switch in different ingredients. • 400ml of beef stock, preferably homemade, but 2 stock cubes in 400ml of water will do

1 In a heavy-based pot heat the oil or dripping then add the onions. Sweat down a little, allowing no more than a little colour to form

2 Add the remaining vegetables and stock and bring gently to the boil. Turn down to a simmer

4 Add the meat, stir, and heat gently for a couple of minutes to warm the meat through

5 Serve in bowls, ideally with warm bread and a dram of whisky

More than likely originating in Orkney Clapshot is one of Scotland’s better known vegetable dishes.

The perfect accompaniment to haggis, or lamb chops, or a rich lamb stew, it's filling and nutritious and the perfect pick me up on a cold winter evening. • 3 medium potatoes, roughly 500g (Desiree are of course the best for mashing, but mealy potatoes, such as Golden wonder or Records, are what were traditionally grown in Scotland)

1 Prepare the turnip by removing the outer skin, then cut it into small and even cubes.

2 Peel the potatoes and chop them into cubes. Boil both vegetables in salted water in separate pots.

3 Meanwhile peel and slice the onion as thin as you can, then fry it slowly in a pan with a little butter, or cooking oil, until well browned, sweet and crispy.

4 When the turnip and potato are soft, when they can be pierced easily with a sharp knife, drain them and leave them to steam for 5 minutes to help get rid of any excess water.

5 Mash the turnip and potato together in a pot over a low heat, this helps to remove any excess water, and to keep it hot. Add a generous knob of butter, a grating of nutmeg and grinding of black pepper.

6 Stir half the onions through and save the rest for the top. Check for seasoning and serve sprinkled with the remaining onions and chives.

The clootie dumpling is a wonderful traditional Scottish pudding closely associated with Christmas and Hogmanay.

The perfect dessert on a winter's night, this steamed dumpling is ideally served with custard (though you can use cream or even ice cream).

Clootie dumpling is a Scottish colloquialism and gets its name from the cloth it is boiled in, cloot being Scots for cloth.

Traditional recipe for Clootie Dumpling (provided by by Fraser Wright) 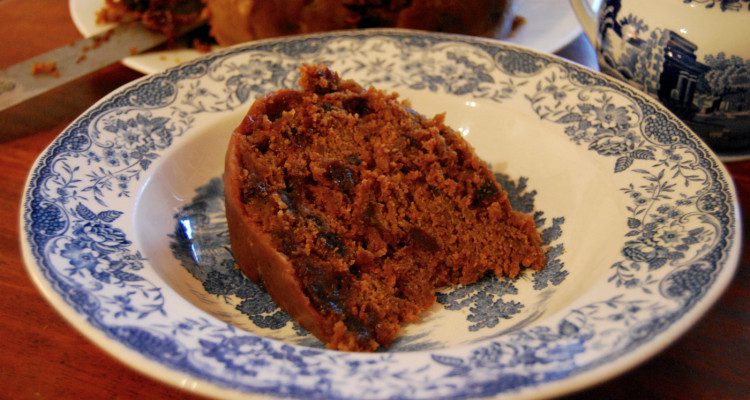 2 Meanwhile, in a large mixing bowl combine all the dry ingredients (flour, sugar, spices, salt, baking powder, dried fruit and beef suet). In another bowl mix the eggs, milk and black treacle together with the grated apple. Then combine the wet mixture with the dry mixture. 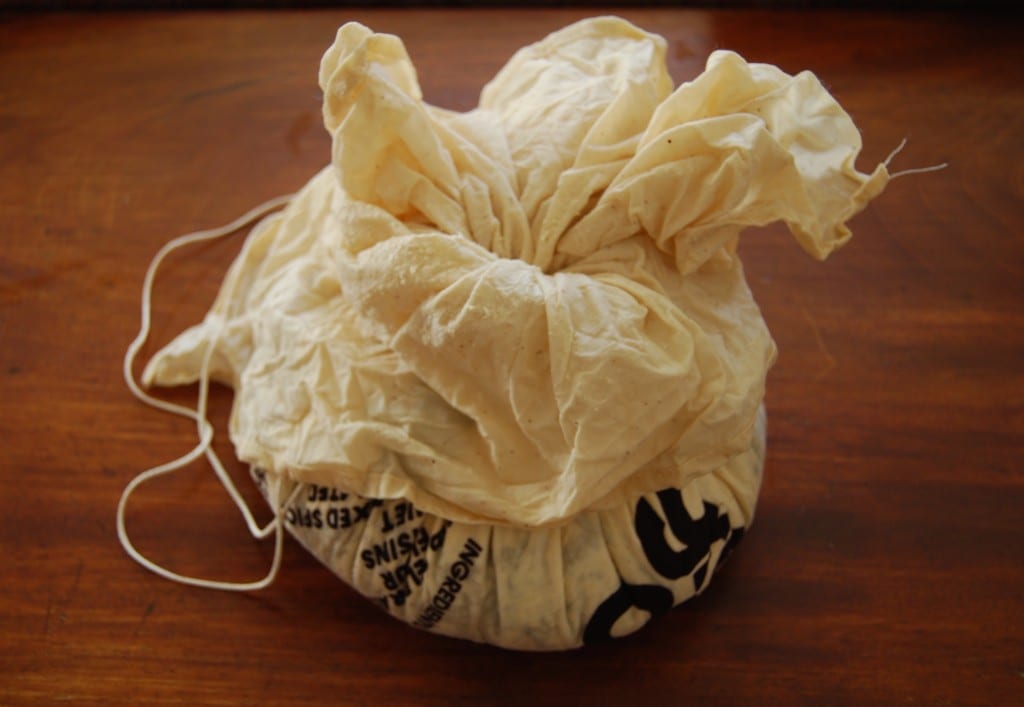 3 Dip your dumpling cloot into the boiling pot of water to soak it for a few minutes.

4 Wring it out to remove the excess water. Now spread the cloot* over a large work surface and dust it fairly generously with plain flour.

5 The layer of flour does not need to be thick but do make it even. The wet cloot and flour combine to form a protective glue-like waterproof surface so make sure the flour reaches far enough to the edges of the cloot, so that the flour will cover the whole dumpling when the cloot is drawn up around it.

6 Empty the dumpling mixture on to the cloot and draw up the cloot around it.

7 Tie it with string, wrapping the string twice around, tie it twice as tight as can be pulled. When you tie the cloot leave a bit of spare room at the top, for the dumpling will expand a little.

8 Make sure to cut a generous length of string so you can tie the excess on to the pot handles to suspend the cloot when it is submerged in the water.

9 Put the lid on and keep on a low simmer for 4 hours. When the dumpling is ready you can lift it out by the string that was attached to the handle. Remove the cloot and transfer the dumpling to a baking tray.

10 Dry the dumpling in a 180˚C preheated oven for 15 - 20 minutes. When you first remove the cloot you will have a white glutinous skin which covers the surface of the dumpling.

11 After it has been in the oven it will become darker and form a nice crust on the outside of the dumpling.

*For the cloot (cloth) make sure to use a good quality tea towel, not terrycloth but flat with a dense weave. Sometimes in ironmongers or kitchen shops you see clootie dumpling bags like I used. Otherwise you can buy a length of calico from a haberdashery.

5 of the best Scottish soup recipes for winter