Looking for a great pint of real ale this weekend? We've picked out some of Scotland's best real ale breweries for you to check out

With all the furore currently surrounding craft beer, many people will have overlooked the cask ales that kick started the demand for good beer in the first place.

Since the formation of CAMRA in the early 70s and the campaign to move the beer market away from cheaply-made, mass-produced, low flavour beers, the real ale movement has continued to grow in popularity.

This popularity has also seen its younger, hipper offspring - craft beer - gain a huge following both here and across the pond.

We feel it's only right to salute those brilliant Scottish breweries who were leading this fight for good beer before the words 'craft beer' were even uttered by a small group of hipsters in a darkened dive bar somewhere on the west coast of America.

Here is our pick of some of the best Scottish real ale breweries around, as well as a few pointers as to why you should check them out: A small family run brewery on the outskirts of Glasgow - Barrhead to be exact - Kelburn brewery have been making waves in the Scottish real ale scene since their beginnings in 2001.

Run by Derek Moore (who was originally part of the team at Houston brewery), his son Ross, daughter Karen and head brewer Andy, the brewery has grown from strength to strength and produced some award winning beers.

Red Smiddy - A smooth ale with a reddish hue and a citrus, fruity aftertaste - abv: 4.1%

Our Star Pick: Jaguar - A golden, full bodied ale with undertones of grapefruit and a long lasting citrus, hoppy aftertaste. As refreshing and enjoyable as they come - abv: 4.5% Beginning life as head brewer and founder James' home brewing experiments, Alechemy has grown into one of the most exciting real ale breweries around, with James taking his inspiration from traditional British recipes as well as Belgian and American styles.

With close ties to their base of operations, the brewery has named many of its beers after many of West Lothian landmarks including the Five Sisters and the Cairnapple.

Our Star Pick: Bad Day at the Office - A definite favourite of ours, this wonderful little citrus hop monster is perfect way to end a 'bad day at the office' - abv: 4.5% When Rob Hill left Orkney Brewery he had a plan to create a new brewery on the island that would give him greater freedom to brew the way he wanted. He did just that in 2005, taking over an old farmstead in Swannay to create the Highland Brewing Company.

It didn't take long for the new brewery to get noticed and since then they have won a swathe of awards (including two CAMRA Champion beer of Scotland awards) and can now be found in bars up and down the length of the country.

Island Hopping - Extra pale in colour and full of hops from New Zealand and America that give the beer a very fruity aroma and taste - abv: 3.9%

Our Star Pick: Orkney Blast - Fruity, hoppy, hints of caramel and toffee; this is what a big hitting ale should be. Strong but infinitely drinkable - abv: 6% Opened in 2011 by Fiona and Euan MacEachern, Loch Lomond brewery has grown from strength to strength with the husband and wife team using their vast home brewing experience to to build their commercial brewery. Set up by Anthony Valenti in 2009, Ayr Brewery began life as an annexe of the GlenPark Hotel in Ayr. Since then, and through a lot of experimentation, Anthony and the team have really found their feet and have been producing some amazing beers over the past few years.

Already finding success in Glasgow and Edinburgh, Ayr have expanded their supply to Northern England and are now doing better than ever.

Towzie Tyke - A cracking little ale with hints of orange and caramel - abv: 4.6%

Our Star Pick: Dr Blacklock Stouts - A sublime selection of stouts that come in a variety of flavours including chocolate orange, banana and peach, well worth a try! - abv: around 6% 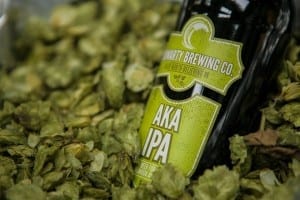 The Middelton Family set up Cromarty Brewing in 2011 to create 'beer worth believing in'. Head Brewer Craig spent time working in America as well as back home with Cairngorm brewery in Aviemore before setting up Cromarty with his parents Jenni and Chap.

Building on a long history of brewing in the area, Cromarty brewing has grown to become one of the most exciting breweries in Scotland.

Brewed Awakening - A partnership between Artysans coffee shop in Inverness and Cromarty brewery resulted in this excellent coffee infused stout great for a pick me up after a longer day. abv: 4.7% Tempest's story begins in New Zealand by way of a chance meeting in a Canadian Brewhouse, Scot Gavin gained experience home brewing in wife Annika's native New Zealand before returning to Scotland in 2007 to pursue their dreams to build their own brewery.

They halved their time between working in the Cobbles Inn and creating their brewery in an old building in Kelso. They are now a successful brewing business and their exciting beers can be found in bars across the country and have even made it onto Aldi's supermarket shelves.

Our Star Pick: This was a hard choice but in the end, the Brave New World won out, a superb high strength IPA with plenty of hops and a malty bite, dangerously drinkable. abv: 7% One of the most exciting breweries in Scotland right now, Fyne Ales have built a hugely loyal customer base by employing two basic tools - word of mouth and great beer.

Set up by Johnny and Tuggy Delap in 2001 on their farm in Achadunan, the brewery has won several awards and gained recognition for several of their excellent beers including the now ubiquitous Jarl.

Our Star Pick: Ok, so it's a bit of a cheat but their collaboration with De Molen to create the stunning Mills & Hills is something to shout about.

A truly amazing Imperial stout, it comes close to perfection, though at 9% you might want to save this one as an extra special treat. abv: 9% Fallen Brewing has been on the go since around 2007, when Paul Fallen started brewing his own beers at home. Now based out of the old Kippen railway station in Stirling, The brewery is making a name for itself on the Scottish brewing scene.

Our star pick: The excellently named Chew Chew is a salted caramel stout with all the flavours implied in its name and type, think caramel, fudge and chocolate - abv: 6%