In advance of British Pie Week who better to talk pies with than Jamie Brown of Jarvis Pickle, a multi award winning pie maker from Eyemouth.

One of the events during British Pie Week is the British Pie Awards, but this year, the organisers of the fiercely contested awards took the decision to postpone until later in the summer or early autumn due to Covid 19.

Jamie said he was initially disappointed: “we just want to be there, hopefully winning awards, but it just wouldn’t be the same if it was held online.

“You can’t get sick of pies. Pies are at the heart of British food culture and are great for every occasion, so maybe on a cold evening a classic beef and ale pie is the tipple, but for lunch in the summer a spinach and goat cheese pie is the perfect pick me up. They’re like the original ready meal.” 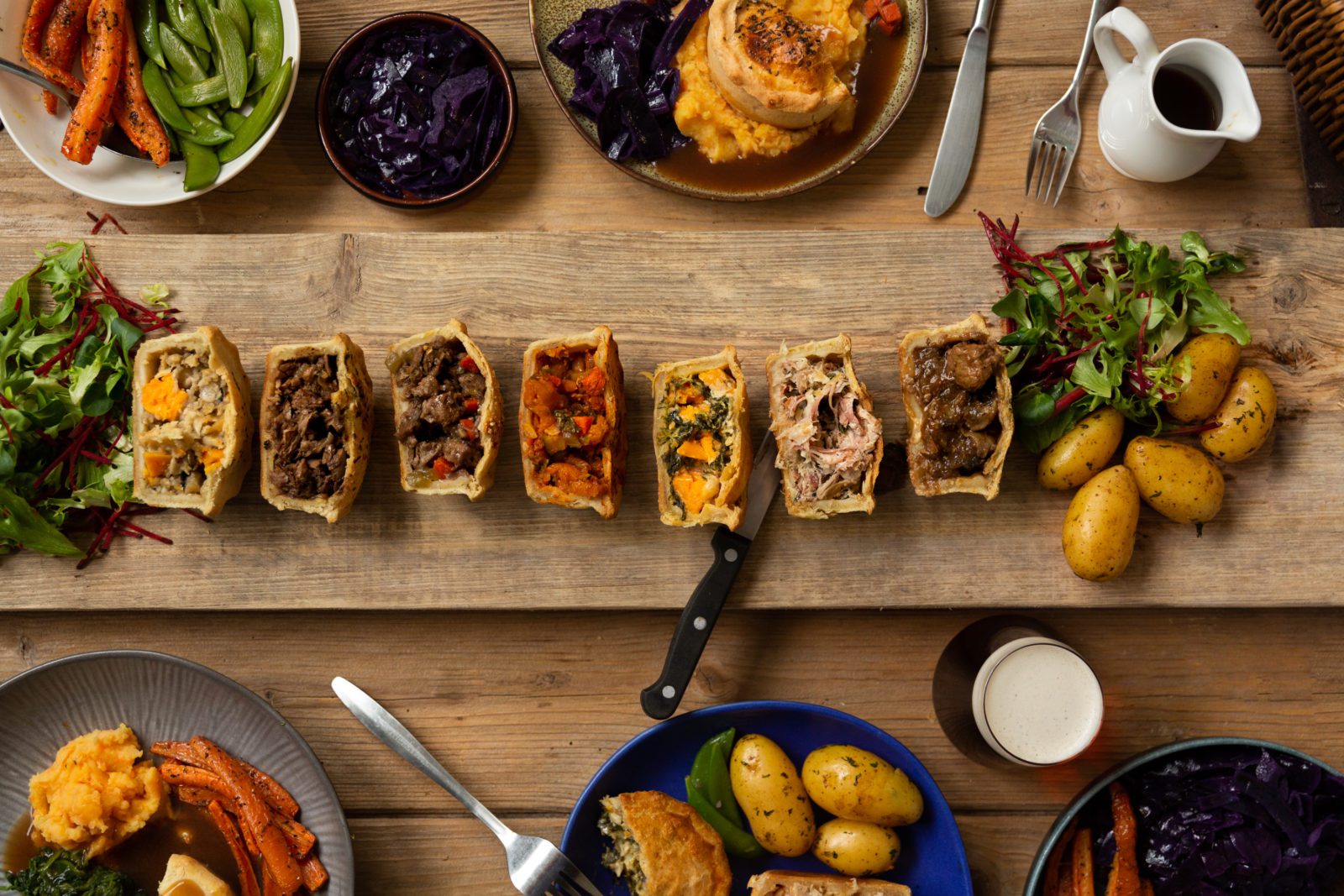 The two directors of the company are Susie Upton and Jamie Brown, a dynamic mother and son team, and this award winning pair have amassed a total of 26 medals in various classes in the competition in previous years.

These include: Cullen Skink Pie in the champion Fish Class and Best Meat Pie in Scotland for their Pork and Blue Cheese Pie in 2018.

They were also the champion in the Vegetarian Class for the Spinach, Goat Cheese and Sweet Potato Pie in 2019, and in 2020 they took the champion Steak and Kidney crown.

They also have success at the Great Taste Awards: most recently with the Vegan Mushroom and Chestnut with Truffle Oil Pie, and previously Pork and Blue Cheese, Cullen Skink Pies and Venison, Port & Redcurrant Pie.

The company is named after Jarvis and Pickle, two Cocker spaniels owned by the company’s founders.

Jamie explained that his mum and her next door neighbour initially started the company but it soon evolved into selling pies and within si months it was just him and his mum.

He said: “we started in the cliché start-up business garage set-up where baking 100 pies was a tough day, and now 1400 pies in a day seems easy.”

Working together in a family business can be tough, and he admits “you’ll always take things more personally in disagreements, everything is really good with us but there are ups and downs like in any family or company.” He explained: “we both approach things slightly differently, which is a strength rather than a weakness. Our core values are always the same; to treat our staff fairly, source ingredients locally, and create quality products.”

Jamie lived away from home for 12 years and worked for a variety of companies, while his mother has another skill set altogether, and he said: “so we are able to come to agreement on everything.”

He said that he grew up in Edinburgh and that, “it was just me and my mum until I was 13.” They moved to Coldingham because they had family here, Jamie’s grandpa- Michael Charlie Brown, was a mixed arable tenant farmer who lived close by to where their bakery is situated now.

His mother had a variety of jobs and has spent time in Newcastle, Spain, London and Edinburgh before returning to the Borders, so he is keen to point out, “she has done all sorts of things.” Rolling out the handmade pastry

One of her ventures was running the Sooty Duck Restaurant in Coldingham for a few years.

Jamie said that it served, “good locally sourced produce and flavour combinations which are similar to the fillings in our pies now.

He said that he worked alongside her as a teenager during the school holidays, “so I had to do a bit of everything: KP, sous cheffing, washing up as well as front of house.”

After finishing school, he studied Politics at Leeds University before heading to London.

He then moved to Vancouver where he worked in events for Ted Conferences, then worked in digital marketing in Berlin before returning to the Borders to make pies.

Their current roles merge all his and his mother’s various talents, he said, “All our skills have all come together with our pie business.”

His mum is currently tasked with more of the business side of things, with a variety of roles from sales to customer service, but he said “hopefully in the future she can get back to recipe development which she really enjoys.”

They have both been influenced by their travels and they try to showcase this in some of their fillings, such as Moroccan Lamb filled with North African spices, prunes and Scotch lamb, or the Malaysian Vegan Cauliflower Curry.

Everything is made onsite, the first job of the morning is to mix pastry ready be pressed into tins and filled with small batch stews.

The orders are completed by 2pm which gives them time to be blast chilled and packed, ready for distribution.

The team now comprises of ten full time workers who are local or have links to the area.

Although they would like to keep expanding Jamie doesn’t think they will ever be an enormous company but he likes to keep an open mind about what they will do next.

He is very hands on, he said: “I’m definitely up to my elbows in flour, and I still do the washing up.

“I have a really good variety at work, I bake on Mondays and Tuesdays from about 5 am and on Wednesdays I work from home, while the rest of the week depending on numbers I’ll either be in the bakery making fillings with the guys, or I will be at home getting on with marketing our business.” Pie and a Pint

As a result of Covid they initially lost 70 per cent of the business overnight due to pubs, restaurants, farm shops and cafes completely closing.

This time round the businesses that they supply are more able to adapt and diversify and stay open in some form.

Jamie said: “obviously some businesses haven’t come back at all yet like the Bow Bar in Edinburgh which is a big customer of ours.”

They have also benefited by the growth of wholesalers selling food hampers direct to customers, and they supply to companies in Kent and London who sell their wares as add-ons to their vegetable boxes.

But another lockdown positive has been the growth of their Pies by post service, which are sent out in temperature controlled box direct to your door.

Another bonus: for every four pies you buy online they will donate one to Cyrenians who are part of the FareShare Network.

During the summer Jamie is normally found selling pies at the Edinburgh Fringe where they are part of the food offering at Assembly George Square Gardens.

At the Fringe they would expect to sell a staggering 12,000 pies. They have also gained some celebrity endorsements along the way, he tells us that, “Derren Brown ate one of our Cullen Skink Pies and gave his verdict of ‘five stars’, and six months later it won and award in the British Pie Awards.”

Sadly they lost out with the Fringe last year which he said, “is a big event for us, as it usually makes up between a quarter and a third of our yearly turnover.

“Every year it just gives us a boost for investment to grow the business the previous year it paid for the new fridges freezer in the bakery and the Fringe before that paid for our vans.”

The bakery is located in Eyemouth and Jamie explained they have been able to grow their premises in stages, he said, “we have always been based in the same place for the last four years, luckily the guy who owns the units is slowly giving us more space as we expanded which is ideal.”

As part of the Jarvis Pickle’s ethos they try, wherever possible, to use local produce, their pastry cases are made with a hot water shortcrust using Mungoswells Flour which is milled only 30 miles from the bakery.

Their meat is supplied by John Gilmour Butchers in Macmerry, Jamie said “they try to source first and foremost from the Tweed Valley and failing that, from within Scotland.”

He tells us their fish is supplied “by our neighbour Ross Dougal Fish Merchants, because he is just up the road from us.” He said: “In England you get the piss taken out of you, about Scottish diet; things like deep fried Mars Bars, Irn Bru and Buckfast, but it is good to be a part of something that showcases the quality Scottish produce which is one of the main reasons we started up the business.

“After we began employing people, our focus shifted slightly, because we’re based in a traditionally farming and fishing area where jobs have been lost, so it is really exciting to be creating jobs.

“I feel there is now a nice little concentration of good food companies around here with Giacopazzi’s Ice Cream, Left Field Kombucha and Peelham Farm all within 10 miles of us.”

Jamie said:”The future looks great, we are growing and evolving as our customers pivot their own businesses in the wake of the pandemic.

“We are keeping our options open for now the future but we are definitely in looking forward to pubs opening back up.”

He feels there is a real growing movement with organisations like Scotland Food and Drink and the Scottish Government getting behind the food, tourism and whisky sector as a way to grow the Scottish economy post Covid.

Jamie said: ” they have some pretty big targets which they are trying to hit, so we want to be a part of that  and although January and February this year is not exactly where we want it to be, we are still up on last year so we can’t really complain.”