We've picked out some of the best food and drink offerings on Glasgow’s longest street, Great Western Road

Glasgow’s West End is known for being beautiful, fabulously diverse and a tad overpriced.

Often overlooked for its more glamorous neighbour, Byres Road, Great Western Road is a community of its own where you can enjoy all the benefits of the West End without the tourists and the hoards of students.

From Anniesland to St George’s Cross, take a walk along the street and find the best eats and tastiest beers. The new kid on the rather long block, 1051 GWR opened in November and has been gaining popularity since. Boasting a menu full of classics like burgers and pizzas and foodie favourites like scallops with black pudding and ox cheek, the clientèle have been raving about 1051 GWR.

There’s also a fully stocked gantry with gins from Scottish distillers and a wide selection of whiskies. Beers have been sourced from local breweries including Inveralmond and Jaw. With an abundance of Hunter wellies and Barbour jackets, the West End can often feel like the middle of the countryside. The Belle, with its craft ales, dogs lying by the open fire and a mix of colourful local characters, feels like a village pub nestled in a bustling city.

There’s no gastro-pub food here; with cloudy Addlestone’s cider on tap and some of the best coffee in the west, it’s a strictly substance over style watering hole.

The pub is such a favourite with Glaswegians that staff are forced to take down the sign at the end of the night to stop it being stolen. No crawl up Great Western Road would be complete without a trip to William’s Brother’s Inn Deep.

Twinkling lights, views over the river and heated outdoor areas under bridge arches make it a great stop off, even in winter.

If you feel the need for something substantial to soak up some of the booze, there’s a wide choice including a haggis topped hot dog, slow cooked ale braised brisket and calorie laden puddings.

And most importantly be sure to dip into their insane craft beer selection, we are sure you won’t be disappointed. Fancy something a bit different from ales and burgers? Then look no further than The Squid and Whale.

The Mexican-themed hang out is the pub of choice for the area’s cool kids. If your sartorial choices run to jeans and a t-shirt and your idea of edgy music is One Direction, don’t let that put you off. The staff are friendly and the food is great and like many venues along this strip, it is more than friendly to your canine friends.

Try the nachos with their gooey cheese or get stuck into the wide range of tequilas, more than befitting a Mexican bar. 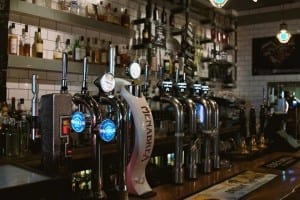 A real community pub, Munro’s boasts roaring fires, cosy couches and a calorie-loaded menu to soak up your pint.

Their beer selection is extensive, with cask and craft ales rotating regularly and a good selection of bottled beers if nothing takes your fancy. The staff know their stuff and if you get into a chat with them, the chance of tasting free beer is high.

If you happen past on a Tuesday, you’ll likely witness the open mic night with local celebrity Tommy Riley. The night is usually country and folk focused with some talented Glasgow musicians taking to the stage.