A Glasgow-based whisky company has announced plans to build a new £10.7 million distillery and bottling complex on the banks of the River Clyde in the heart of the city.

Independent bottling brand Douglas Laing & Co. made the announcement on social media declaring it to be the "biggest news in their 70 year history".

The development at Pacific Quay, considered to be one of Glasgow’s most high profile waterfront sites, will also see the launch of their new Govan-based Malt Whisky, which the company say will "celebrate the connection between the firm and the site of its new distillery".

The new project includes plans for a new corporate head office for the brand, a visitor centre, a whisky laboratory and archive, bar and bistro.

Already well established worldwide, Douglas Laing & Co. exports to over 50 countries and their latest plans will see them become the latest independent bottler to secure their own distillery following in the footsteps of the likes of Adelphi (Ardnamurchan) and Wemyss Malts (Kingsbarns).

Beyond private family money, the Scottish Government is part-grant funding the innovative development by Douglas Laing, which will create up to 38 new jobs and will see the existing Douglas Laing workforce almost treble from 22 to 60. The site for the family Scotch Whisky firm's new project, in the heart of the city of Glasgow. Picture: Douglas Laing & Co

Announcing the funding, Scottish Government Environment Secretary Roseanna Cunningham said: “I would like to congratulate Douglas Laing & Co Ltd on securing this funding, which will pave the way to bring quality whisky production to the heart of Glasgow.

"This is just one example of how the Scottish Government in supporting our world-class producers to flourish, ensuring that our food and drink continues to be the cornerstone of our economy, environment and culture.”

Cara Laing, director of whisky in the firm, and third generation family member, added: “Until now we have depended on third party companies for our production requirements. These working associations have been and still are invaluable, but now we feel it’s time to be more in control of our own destiny and to build on our core and current business.

“With Generation 3 firmly entrenched, we undertook a strategic review and identified an opportunity to become a distiller in our own right with a dedicated bottling and warehouse capacity. We believe this will see the core business develop at a rate of 15 per cent year-on-year, helping to grow our existing brands while allowing us to introduce new marques, and seek out new international markets.

“Instead of being perceived as an independent bottler, we will become a distiller, owning the production process from start to finish - from barley to the bottle - with an initial capability of producing considerably more than 100,000 litres of alcohol per annum.”

Cara, one of the youngest members of the Keeper of the Quaich, an exclusive society which recognises those who have made outstanding commitment to the industry, is also an ambassador for the ‘Not Just For The Boys’ Campaign, which dispels the myth that certain industries should be male dominated, she said: “We have long held this ambition for the company to operate its own distillery and bottling operation.

"We are proud of our Glasgow Heritage and the company, founded and based in the city, are delighted to announce this project on the banks of the Clyde; in the heart of Glasgow. 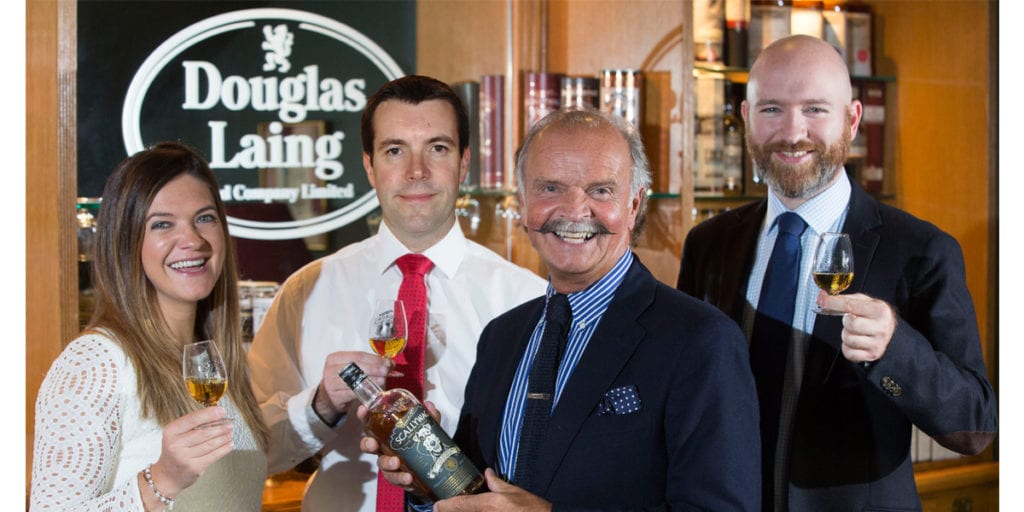 “It will bring whisky distilling back to the south side of the city and will create welcome jobs, generate significant additional high-value exports and hopefully become an additional tourist attraction to the city.”

Water will be piped to the complex from Loch Katrine which is the source of Glasgow’s water supply and 300 tonnes of barley will be brought in from Scottish farms to create the whisky.

The firm was founded by Cara’s grandfather, the eponymous Fred Douglas Laing and the company is now run by her father Fred, the managing director who said: "With this innovative and ambitious plan to absorb our head office, distillery and bottling facility on one footprint, we continue to put in place an exciting future for Douglas Laing & Co and our team.

"We are indebted to all our suppliers and partners who have helped to bring us to this stage, and look forward to continuing those invaluable and trusted relationships in the future.”

Cara added: “As we approach our 70th anniversary, we are seeking the step-change which will see us relocate to help us achieve our global growth aspirations. It's an exciting time at Douglas Laing and this development is the perfect way to celebrate our seven decades in the Whisky industry."

The new single malt distillery will be the third to be created in the city after the already established Glasgow Distillery, which has been producing gin, vodka and laying down spirit for maturation over the past two years, and the new Clydeside Distillery, which is currently under construction.