Brian Elliott: Love is all around for Lidl's one-stop supper

A while back, I featured a “one-stop” supper (where all the food ingredients and wine came from one retailer - M&S that time). The launch of their Summer Wine Collection a few days ago, prompted me to repeat the exercise with Lidl.

Lidl use widely acclaimed chef Kevin Love - formerly head chef at Heston Blumenthal’s Michelin starred pub in Berkshire – to mastermind their menus. These then appear on the Lidl website - often supported by a youtube video. His suggested menu for this exercise was bruschetta, beef wellington and slow cooker crumble; the accompanying wine selections, however, are mine.

Starting with the bruschetta’s terrific combination of tomato cheese and ham, it made sense to match Italian food with Italian wine. That’s true even when the grape variety is traditionally Austrian – as with 2015 Gruner Veltliner Sudtirol Alto Adige (£7.49). The bruschetta brought out the sweetness of the wine’s textured apple fruit and spices which neatly counterbalance its engaging mineral backdrop.

Despite the mushroom and mustard in the beef wellington, the elderberry and black cherry elements of 2014 Chianti Montalbano Medici Riccardi (£6.49) works well with the meat, especially given the wine’s measured tannin and graphite centred depth.

Add the (absolutely brilliant) sauce, though, and you do better with the soft yet fruity core range 2014 Cimarosa South Eastern Australia Cabernet Sauvignon (£4.49).

Here, the acidity embellished bramble fruit and gentle tannin demonstrate why beef and cabernet love one another - while the wine’s vanilla, chocolate, cinnamon touches merge nicely with the sauce’s port based sweetness.

Work for the dessert can be done in advance but, once it is served, its mixed fruits marry nicely with the honey and orange substance of 2014 Bodvin Tokaji Cuvee (£5.49 for a half bottle). This is great dessert wine at the price and its fresh, supporting acidity resonates particularly well with the apples in the crumble. 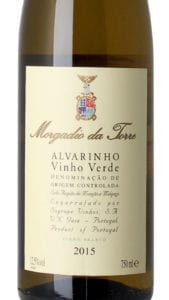 As we savour those popular albariños from Spain’s Rias Baixas, we sometimes forget the quality available just over the border. Here, for example, you have extra layers of savoury texture underpinning the wine’s ripe, perfumed, nectarine and pear fruit and the lively pink grapefruit acidity that embellishes it.
£9.99 at Majestic

Consequently, it delivers - as here - some amarone depth but with a significantly lower price tag. Its fruit is cherry and plum centred with bold strawberry acidity, smooth texture and hints of clove all wrapped around by nicely restrained tannin.
£7.50 at Morrisons