A guide to the 5 whisky regions of Scotland

The whisky regions of Scotland are as distinctive as the French Terroirs, writes Sean Murphy

The magic of whisky comes, in part, from the fact that the spirit is endemically tied to the land from which it is produced.

From the rivers that flow down Scotland's munros and bens which feed the Lochs that provide pure water, to the fertile land that grows the malted barley. These ingredients combine to create the mash that, through the liquid alchemy of distillation, will go onto to become something much more than its simple parts.

Scotland itself separates into five main whisky producing regions, each offering their own unique influences on the whisky they produce. These regions, defined by geographical boundaries laid down by law, can be thought of as similar to the Terroir regions of France, where a particular wine, say, Burgundy, could only ever be produced from the land of the Burgundy region - because its soil and micro-climate are so unique, that they have an unmistakable 'stamp' on its product.

Using The Scotch Whisky Regulations 2009 (SWR) definitions, which define the five major traditional localities and regional indications, here is a brief guide to each of Scotland's five main whisky regions. Once densely populated with whisky distilleries (The Scotch Whisky Industry Record lists 215 known distilleries in the Lowlands in the late 18th century), no-one is quite sure why their was such a drastic decline in numbers. Many point to successive Parliamentary acts that favoured English gin production, curbing the lowland producers' biggest market - whereas other reasons cited are a preference for the stronger flavours like those of Highland whiskies.

The Lowland region lies south of an invisible border that stretches from Greenock on the west coast to Dundee in the east. There are currently three major distilleries; Auchentoshan, Bladnoch and Glenkinchie - with two more looking to begin production in Daftmill and Aisla Bay.

The region is known for producing lighter, smoother, non-smokey style of whiskies. Lowland malts are cited, by writers such as Charles MacLean, as being perfect for pre-dinner drinks. They are also excellent introductory malts and can be appreciated by beginners and experienced whisky drinkers alike - with triple distillation more common in the Lowlands than in any other region.

Interesting fact: The Highland/Lowland divide was actually borne out of the whisky industry and defined by the Wash Act of 1784. Different custom duties and provisions applied north and south of the ‘Highland Line’. The Act aimed to stimulate legal distilling in the highlands and to reduce illicit distilling. Accordingly lower rates of duty were applied to small scale distilleries north of the line. The largest number of distilleries and possibly the most densely populated too, two thirds of all malt whisky production is in the Speyside region. Charles MacLean defined Speyside malts as: “generally sweet and high in estery notes, which makes them redolent of pear drops and acetone…even carnations, Parma violets, roses, apples, bananas, cream soda and lemonade.”

In more recent times, this region as began to produce many differing variants of their classic malts and it's not uncommon to see highly peated malts sitting side-by-side with the more traditional style. Speyside whiskies have an increasingly incredible range of flavours, from the sherry matured malts of Aberlour and Mortlach through to the peated range of malts by Benriach and Benromach, there's bound be a whisky to cater for any tastes.

Interesting fact: Glenlivet is perhaps the most famous of the whiskies from this region and indeed its name was so popular that many other distilleries co-opted it. Eventually legal action was taken when J.G. Smith (the owner of the distillery) tried to claim ownership on the Glenlivet name, but he was only partially successful. The decision to hand Smith the naming rights also permitted other distilleries to hyphenate their distillery name with the "Glenlivet" name. You can still see this on some of the older bottlings from this area.

Typical style: Rich and fruity, though use of peat has become more prevalent. Campbeltown lies towards the end of the Mull of Kintyre peninsula on the West Coast and was once home to over 30 distilleries - now only with three operating: Glen Scotia, Glengyle, and Springbank.

Campbeltown malts, such as those from Springbank distillery tend to be robust, complex whiskies that are full of flavour with hints of sea salt and mild peat. Glen Scotia and Springbank's triple distilled Hazelburn are both lighter alternatives for those that prefer their malts a little more breezy. When whisky historian Alfred Barnard visited in 1885, he described Campbeltown as 'Whisky City'.  At that time, the area had 21 working distilleries, which Barnard took two weeks to tour.

Interesting fact: The demand for whisky at the early part of the 20th century drove Campbeltown productions rates so high that impurities were carried over into the final spirit, as corners were cut and quality inevitably dropped. This led to a fishy smell that Frank McHardy, of Springbank, describes as having people accusing the Campbeltown distilleries of "maturing the spirit in herring barrels because it tasted and smelt so fishy". This region, which encompasses the islands as well, probably has the greatest range of flavours, from the lighter style of the 'midland' malts - like Glengoyne and Deanston - all the way up through to the brinier coastal malts - such as Old Pulteney and Oban.

The island malts also have their own styles ranging from the lightness of Arran, through to the sweetness of Jura and Tobermory, and the rich, briney complexity of Highland Park. 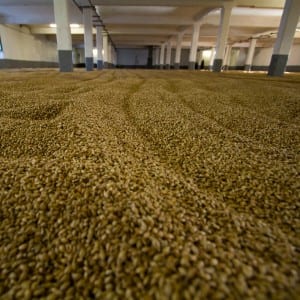 Islay currently has eight producing distilleries; creating some of the most famous and well known of all the whiskies available. It's fair to say that Islay (pronounced 'eye-luh') lives and breathes whisky, indeed most of the island's population are involved in its production in some way either through agriculture, distillation or distribution.

It is even believed that it is one of the first places that monks began to distil the uisge beatha, during the early fourteenth century. This was due to the near perfect coalescing of several elements; excellent soil (for growing barley), peat (for fuel) and a regular source of pure water.

The island itself very much drives the flavour of the whisky produced there, Islay is largely composed of peat - most of its water is brown due to this abundance - while winter gales often blow sea salt spray far inland, adding briney notes to the already smokey character of the peat.

Interesting fact: Not all whiskies on Islay are massively peaty. To a large extent, both Bunnahabhain and Bruchladdich are very mildly peated or not peated at all.

Typical style: Big and smokey (with the exception of the aforementioned Bunnahabhain and Bruichladdich).