Although summer may see an abundance of festivals, autumn is still busy with food and drink related events.

With darker nights and cooler weather, now is a great time to head along to one of these foodie festivals, events, markets or dinners. Fans of gin and seafood will love this special, one-off event which is being held on the beautiful  banks of Loch Fyne.

The event is split into two, an afternoon of tastings, from 1pm-4pm and an evening dinner.

The evening dinner, priced at £35 per person, includes a Mey Selections G&T (or glass of fizz) on arrival and a  "Taste of Loch Fyne" menu, which showcases the brand's finest produce.

Tickets: from £6 for a weekday wristband Over 80 bars across the capital are taking part in this year’s Edinburgh Cocktail Week (30 more than last year) including Harvey Nichols, Tigerlily, Dragonfly, The Voyage of Buck, The Voodoo Rooms and The Grand Café, with each bar designing a unique Signature Cocktail which can be enjoyed for just £4 each with an ECW wristband.

This year’s expanded format also sees the introduction of a new Cocktail Village at Festival Square, which is free to enter with a wristband.

Enclosed within a marquee, the Cocktail Village will act as the social hub of the week-long cocktail celebrations, where attendees can meet up with friends and catch up over £4 cocktails from 15 pop-up bars such as Edinburgh Gin, Grey Goose Vodka, St-Germain, Johnnie Walker, Rumbullion Rum, Belvedere Vodka and Poco Prosecco, plus a very special ‘Golden Ticket’ themed bar from The Pop Up Geeks.

As well as lots of cocktails to try, there will also be live music, DJs and drop-in style masterclasses and tastings to keep festival-goers entertained.

This pop-up foodie market will showcase the abundance of produce that is available in the picturesque East Neuk of Fife.

Free to enter, the food weekend event runs this weekend (8-9 September) and will introduce guests to the producers who create award-winning fare using time-honoured techniques.

Part of the Balcaskie Estate, the picturesque barn conversion aims to provide the Kingdom of Fife with an all-season destination for food lovers to explore the natural larder of Fife and beyond.

It will also provide an inspiring space for food businesses to create their produce, whether that be jams made from soft fruit grown in the nearby fields, wild game or rape seed oil harvested locally.

This weekend marks the summer harvest, with a focus on activites that celebrate local and organic food and freshly harvested grain.

The line-up of artisan producers based at Bowhouse will be joined by a host of the best makers from Fife and beyond alongside the Scottish Soil Association to celebrate Organic September.

It’s also Sourdough September and Bowhouse maker Scotland the Bread will be leading a series of hands on sourdough sessions.

Visitors will be invited to make their own slow-rise sourdough loaf to bake at home using grains grown in the fields around Bowhouse and the new mill facilities from Scotland the Bread. Historical venue, Borthwick Castle, will open its doors on 17 November to welcome guests to an exclusive evening of autumnal dining.

The five course menu will showcase the best of Scottish fare from the season, with Roux-trained chef Derek Johnstone priding himself on using locally sourced, seasonal produce when creating his menus.

The meal can also be paired with a selection of carefully chosen wines.

Guests will begin the evening with welcome drinks in the sumptuous State Room, before descending to the Great Hall for dinner.

“It is the opportunity to let my imagination go to use the best of the season’s Scottish produce, and for our guests to have an amazing evening in our unforgettable Great Hall.”

Usually an exclusive, private hire venue, Borthwick Castle Dining Club evenings are one of the few occasions when guests are able to enjoy the opulence of Borthwick Castle without hiring it out in full.

Guests who wish to stay in the castle can book overnight stay including dinner, bed and breakfast for £750, based on two guests sharing. To mark September fashion month, one of Glasgow’s most iconic hotels is offering well-heeled guests the chance to indulge in a range of new cocktails inspired by their favourite designers.

Grand Central Hotel is set to launch the new drinks menu inspired by some of the top fashion houses who will be showcasing their latest collections in New York, London, Milan and Paris throughout September.

Champagne Central, one of the city’s hotspots with fashionista who love the latest catwalk styles is set to launch a brand new shoe-themed cocktail menu in partnership with designer brand retailer Cruise located on the city’s fashionable Ingram Street. Picture: the championships includes a special category for oatmeal combined with any other ingredients

The historic Highland village of Carrbridge is the place to be this October as it comes alive for the 25th annual Golden Spurtle World Porridge Making Championships.

The renowned competition attracts porridge makers from across the world with professional and amateur chefs, food producers, food bloggers, small business owners and home cooks from all over the world vying for the Golden Spurtle Trophy and the coveted title of ‘World Porridge Making Champion’.

The main event takes place in the village hall with competitors battling it out, “Bake Off” style, to create their very best porridge using just three ingredients - oatmeal, water and salt - while guests can watch the challenge both in the hall and the purpose built marquee, with commentary from MC and radio broadcaster Richard Jones.

In addition to the traditional porridge, there is also a speciality category for oatmeal combined with any other ingredients to celebrate the versatility of oats, with past winners including Sticky Toffee Porridge, Fruity Date Porridge and Pinhead Risotto with lemon, thyme and parmesan.

This year, to celebrate VisitScotland’s Year of Young People 2018, there will be a junior heat.

Once the cooking has finished, guests will also have the chance to sample the entries and chat to the contestants before the winner is announced.

There will also be whisky tasting hosted by Gordon and Macphail ambassador Martyn O’ Reilly, a local food market hosted by the Inverness Food Assembly, a raffle of local goodies and the chance to buy your own hand-turned Spurtle, specially commissioned recipe books and commemorative tea towels. Scottish Chinese restaurant Lychee Oriental in Glasgow is celebrating the annual Mid-Autumn Festival – one of the most important dates in Chinese culture – with a new dedicated five course menu, for four weeks only.

To mark the occasion, Lychee Oriental Head Chef, Jimmy Lee has created an impressive five-dish 'Chinese Moon Festival' menu, which will be served from 25 September until 25 October.

Diners can look forward to seasonal produce such as pumpkin, chestnuts, taro, persimmons, sweet potato, walnuts and mushrooms, along with traditional celebratory foods like crab, pork, and duck. 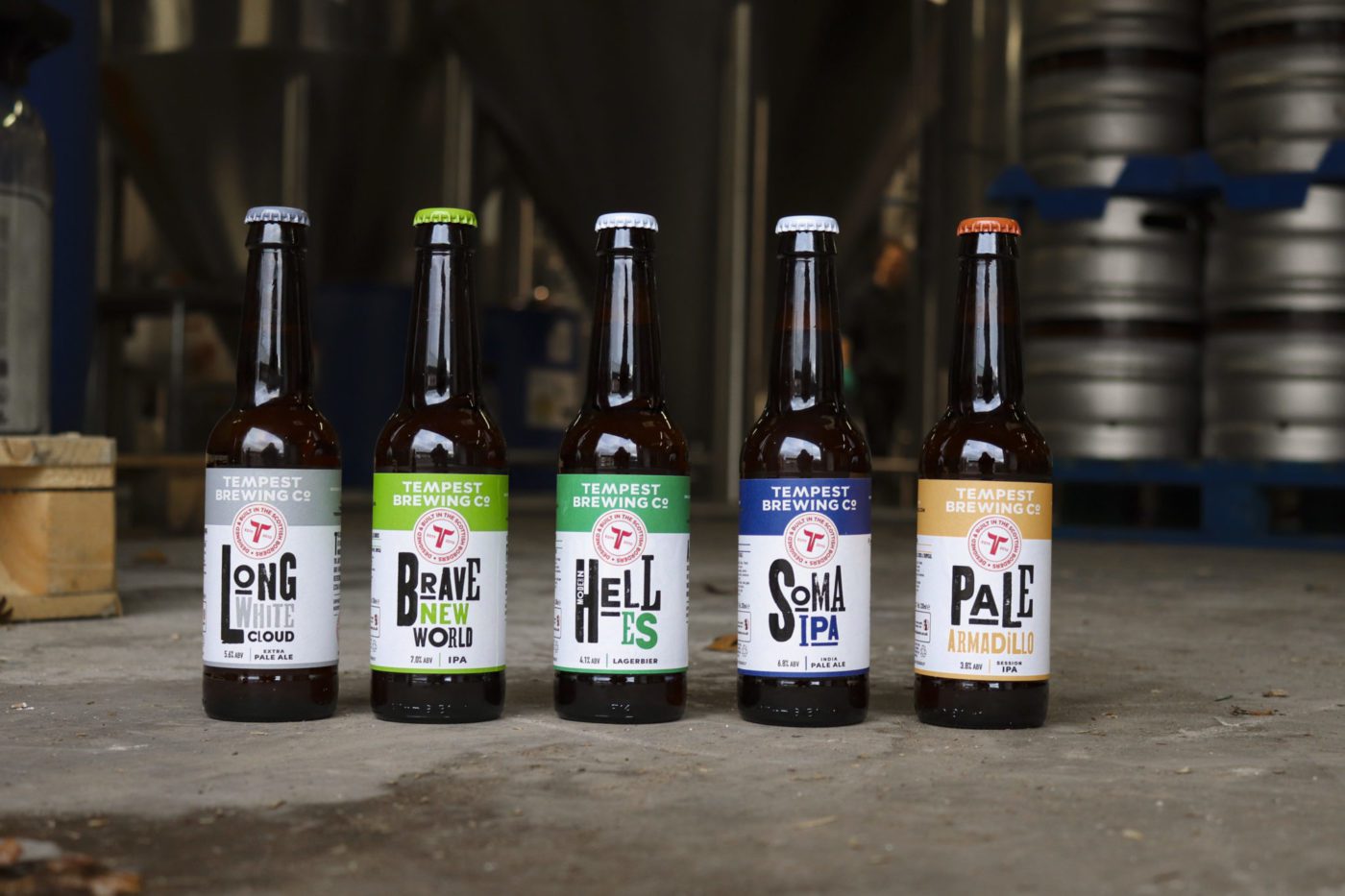 The Edinburgh Craft Beer Experience promises to be a truly immersive beer event, taking over all three floors of the Assembly Roxy on Roxburgh Place to bring a taste of the very best beers from Scotland, the UK and Europe.

The Craft Beer Experience will run for five sessions over the three days with beers from over 20 breweries for visitors to taste, with some beers appearing in Scottish taps for the very first time.

The Main Hall will be home to 13 craft breweries from Edinburgh’s doorstep and beyond. From Edinburgh and Leith will be the unfiltered offerings of Pilot, and just beyond the bypass, braw seasonal stylings from Cross Borders in Dalkeith. Looking past the Lothians, pico-brewery Ride Brewing will be representing Glasgow, with larger brewers

Also in the Main Hall, to line the stomach, there will be a range of traditional and not so traditional nourishing Scottish fare, and representing the other side of Scotland’s drinking habit, Musselburgh based Hickory Bars will be serving cocktails from its Botanical Garden Bar, with a drinks list showcasing the very best of Scottish craft spirits and the country’s distilling credentials.

Beer enthusiasts can also enjoy a pint or two from UK-wide brewers such as Northern Monk and Magic Rock Brewery, The Kernel, Camden Town Brewery, Tiny Rebel and the Boundary.

Entertainment can be found in the form of pub quizzes or why not attend one of the beer themed workshops and masterclasses?

Tickets include a specially designed schooner glass, a token towards the first beer, a full programme of events and brewers, as well as access to the demonstrations and masterclasses. Those looking for a behind the scenes luxury dining experience can now get the best seat in the house as The Restaurant at The Principal Blythswood Square Hotel, Glasgow launches the exclusive Chef’s Table.

The five-star hotel has recently announced a series of luxury experiences curated by some of the most talented chefs currently working in Scotland.

Chef’s Table is led by Executive Head Chef at Blythswood Square, Zoltan Szabo, and will work in partnership with a selection of the most in demand luxury brands on the market.

This dining experience allows unrivalled access to Chef Szabo who will guide diners through the various cooking methods, the provenance of the ingredients and how they come together to create the perfect dish.

The first Chef's table will be the Moët & Chandon Champagne Pairing Dinner on Thursday 20 September.

In consultation with the Moët & Chandon team, the brigade of talented chefs at Blythswood Square have selected ingredients to reflect both the distinct characteristics and subtleties of each champagne, to compose a delicious tasting journey.

Chef’s Table takes place on the fourth Thursday of every month starting from Thursday 20 September, with prices starting at £55 per person. Season passes are available for a choice of six dinners throughout the annual calendar. These include pizza and Peroni, which is back by popular demand for the cooler months.

On Mondays and Tuesdays, Civerinos at Hunter Square will run their famous pizza and Peroni offer where diners can tuck into a favourite pizzas washed down with a Peroni or soft drink for only £10.

Autumn also sees the return of Thugslice at Civerinos Slice on Forrest Road.

Aimed at students and bargain hunters, the deal includes unlimited slices of pizza and one can of beer for £10 per person.

Famous for their New York style wood fired pizzas and modern Italian street food, Civerinos are well known for their secret classic family recipes passed down through generations, and have become so popular that a third outlet will be opened in the capital at the end of the year.