8 of the best whisky bars in Edinburgh

We've picked out some of the best bars and pubs to grab a dram (or two) in the capital.

By: Rosalind Erskine
Published: July 29, 2021
Categories: Drink, In the News

From historic pubs to newly renovated bars, here are some of the best whisky bars in Edinburgh to visit for a dram or two. The renovated Queen Street premises of the Scotch Malt Whisky Society opened its whisky bar to the public in 2017, to the great delight of whisky fans.

With more than 200 rare single malt whiskies and other spirits are available at the Kaleidoscope bar each month, visitors are encouraged to explore its ever-changing spectrum of whisky flavours,

The Kaleidoscope, in conjunction with the Society, focuses on flavour profiles, instead of distillery or region, with staff on hand to guide you through the various styles offering advice on each dram and where to go next.

The Society’s catalogue of single cask single malt whiskies, which are all categorised by flavour, allow for the ultimate customisation of the drink.

Whisky lovers can experiment with twelve twists on their tipple with flavour profiles ranging from Old & Dignified to Young & Spritely.

Good for: something unexpected

Located on the popular Shores of Leith, the Teuchter’s Landing is a great place to grab a pint, head to their beer garden and enjoy the sunshine on a summer's day.

But if you're visiting when the weather isn't so good, you'll want to stay inside and admire the bar's excellent array of over 100 whiskies, including single malts, blends and international names.

Good for: a cosy dram 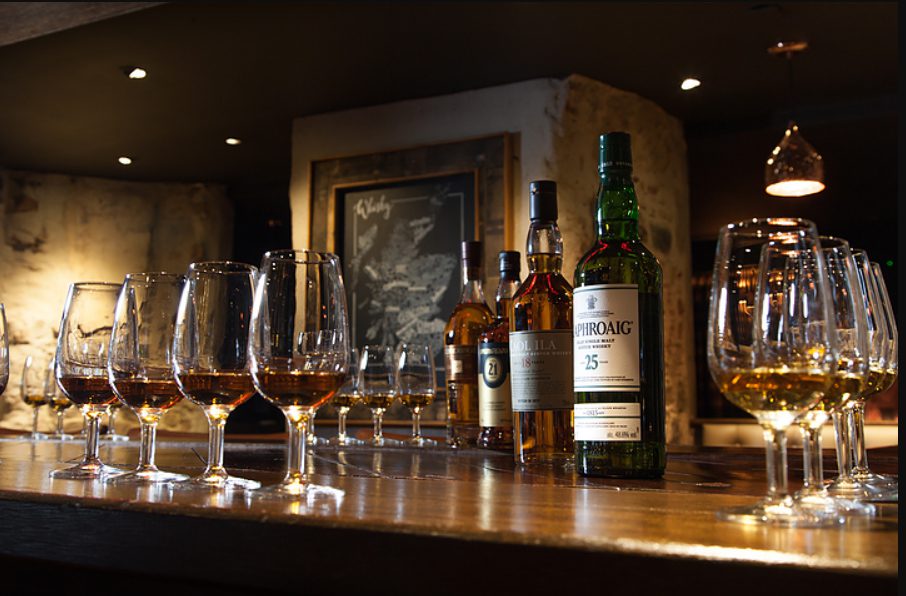 Run by some of the most knowledgeable whisky aficionados in Edinburgh, there’s always a tour guide on hand to take you through the world of Scotch whisky be you a beginner or a seasoned veteran.

Why not take away the hassle of having to choose a dram by checking out their excellent tailored tasting flights?

These include themes such as: For Peat's Sake - a flight that explores different styles of peat such as Bruichladdich Octomore 9.3 and a Laphroaig 27 year old.

Established in 1871, The Canny Man's is an Edinburgh institution and described by chef Rick Stein as "the best pub in the world".

The first thing visitors may notice is the gantry with its bright red paint job and the hundreds of bottles that rest there.

There’s over 250 whiskies on offer here and the staff are deadly serious about helping you to enjoy them, so pull up a pew, ask for some advice and let the people behind the bar regale you with tales of the pub’s rich history as you take in the eclectic decor that’s been gathered by the patrons of the pub since it first opened.

The team also run a free of charge buffet Monday to Thursday between the hours of 5 and 6pm.

Good for: a dram and a chat For award-winning food as well as a great location and over 440 whiskies, you can’t go wrong with the Amber Restaurant and its accompanying whisky bar.

The restaurant, which is part of the Scotch Whisky Experience, offers whisky and food pairings as well as fantastic Scottish Tapas.

Also on offer are a selection of regional tasting trays for those of you who want to get the most out of your whisky tasting experience.

We also recommend you take a look at the McIntyre Whisky Gallery, a beautifully lit bar which offers direct access to the Diageo Claive Vidiz Scotch Whisky Collection (described as one of the 7 wonders of the Scotch whisky world). Situated smack bang in the middle of the Royal Mile, this traditional bar is an easy find for any tourist (or local) looking to escape the hustle and bustle of the hoards of shoppers outside.

The perfect place to enjoy a dram, Whiski’s gantry is always well stocked and filled with a range that would make any whisky collector jealous (there’s over 300).

The bar provides all day dining which means no matter the time of day, you can grab a bite to eat while you take a seat and decide on which whisky to enjoy next.

Visitors can also book a whisky tasting which are held daily in the tasting room - located next to the whisky shop. Taking the baton from its stablemate and cranking it up a notch or two, the Whiski Rooms, which is also situated near the Royal Mile, offer a brilliant selection of drams in a far grander setting.

Perched on the Mound, the bar offers dramatic views over Princes Street and offers daily tutored tastings, a dedicated whisky shop and is home to an Ardbeg private dining room.

Good for: a dram with a view Located on Victoria Street (also known as West Bow), and situated close to both the Castle and the Grassmarket, the dog-friendly Bow Bar is one for fans of truly traditional pubs.

Hidden behind its unassuming frontage of blue paint and plain glass windows, you’ll find a classic gantry filled to the brim with whisky – over 300 – and a traditional bar that offers more than its fair share of real ales.

With friendly staff and a cosy atmosphere, this is a real hidden gem in the heart of Edinburgh.

Good for: a traditional atmosphere