Other than the little known fact that it was invented by a Scot, here are ten things you might not know about everybody's favourite beef extract, Bovril.

Created in Edinburgh in the 188os by Midlothian native John Lawson Johnston, who experimented with what he called "fluid extract of beef" after starting as an apprentice in the family butcher shop on Canongate, here are 10 facts about this football fan favourite.

1. The name was inspired by Latin word for ox and a popular novel of the time The first part, chosen by Lawson when he rebranded in 1886 changing the name from "Johnston’s Fluid Beef", comes from Bovine - the Latin for Ox.

The second part was inspired by the word Vril, the name given to a powerful energy-giving fluid in a hugely popular occult novel of the time, The Coming Race.

2. It was invented under the orders of Napoleon Well, in a roundabout fashion. In 1870, the French were soundly beaten in a conflict with the Prussians, and looking for answers to why this had happened, came to the conclusion that the poor quality of its soldiers’ rations were affecting their fighting capability.

They then reportedly asked Johnston, who had emigrated to Canada by then, to devise a form of "canned beef" that would supplement the standard fare.

Johnston instead came up with a thick concentrate of salty beef that could be either eaten as a spread on a slice of bread or dissolved in hot water to provide a savoury drink - the product he had earlier created in Edinburgh - and the rest they say, is history.

3. Inventor Johnston was a canny promoter He organised a stunt for a launch of Bovril at the 1887 Colonial and Continental Exhibition in London by recreating a Montreal Ice Palace in frosted glass to encourage sales of Bovril from the chilly location.

4. The first Bovril adverts appeared in 1889 One employee went on to set up his own advertising agency. The beef drink was his first client.

5. One famous advert showed a picture of the Pope drinking a hot mug of Bovril 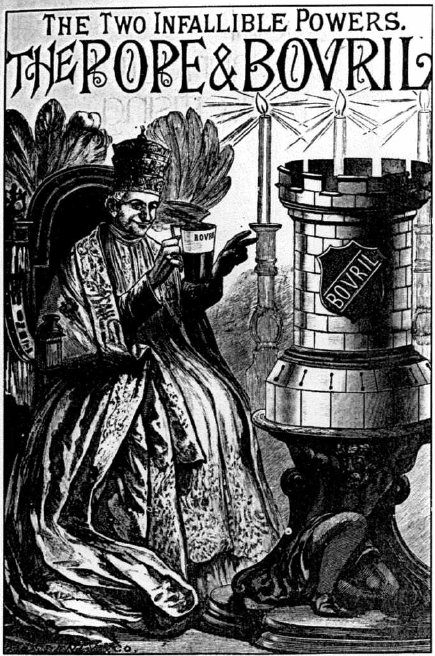 Above was the slogan, "The Two Infallible Powers – The Pope and Bovril".

6. It was so popular by the turn of the century that was being sold in more than 3,000 British pubs, grocers and chemists It was available in South Africa and South America around that time.

7. Bovril was advertised as a potential aid to slimming in the 1980s

Via a campaign fronted by model Jerry Hall, using the slogan "Are you a Bovril body?"

Its "King of Beef" instant flavours for stews, casseroles and gravy came along in 1971. The adventurer was said to have shared a cup of Bovril with Captain Scott on Christmas Day of 1902, near the South Pole, after a chilling four-hour march.

10. Unilever, the company that now produces Bovril, sparked anger six years ago by changing its composition from beef to yeast. The change was made amid concerns about mad-cow disease and the growing popularity of vegetarianism.

After prolonged criticism that the product had lost its taste, Unilever relented and reintroduced beef extract.

The old North Stand - where the Sandy Jardine Stand is now - at Ibrox Stadium was once called the Bovril Stand because of the large and distinctive advertisement displayed on its roof. Bovril has appeared in TV shows like Top Gear and Frasier.

SNP MP Mhairi Black said the strangest thing thrown at her during the independence referendum was a Bovril cube.  She added they’d gone to the trouble of unwrapping it before throwing it.

She said: “I thought ‘that’s a lot of effort and it’s not even hurting’.”