We’ve officially reached peak hipster. I realised this when visiting this new place, owned by The Shilling Group, who also preside over successful Edinburgh bars including Cross & Corner and The Fountain.

The signs of Fonz-level cool are all there: a bearded barman, grey walls set off by flashes of coral, lighting that resembles a Martin Boyce installation, an obscure name (it references Scottish geologist James Hutton, whose family farm in Berwickshire was called Slighhouses) and clever libations far removed from a Slippery Nipple.

Despite this, I’m not averse to the style, though I realise that soon everywhere is going to look like this, until there’s a backlash and they start non-ironically modelling themselves on a La Tasca or Wetherspoons circa 1993.

Although they’ve managed to make the horseshoe-shaped former premises of Bar Kohl look a lot bigger, it’s still a bit like being on a galleon, especially when you put a metal tealight holder on its side and it rolls off the table because of the subsidence (fun!).

From choices including Tea at the Genever Convention and the Icelandic-inspired Fifteen Ways to Say Cat (£7.50 each), I went for the first cocktail on the list – Brown Paper Buck (£6), with “Buffalo Trace Bourbon, Fever Tree Ginger Ale, plum bitters, bag and straw”.

It did, indeed, come in a little bottle, wrapped in brown paper with a neat bit of string tied in a bow around its waist, like a pair of Charlie Chaplin’s trousers. I sipped it through a stripy straw, and it tasted like fall in the US of A.

Lunch dishes are smallish portions for sharing or eating solo.

Our bearded and be-cardiganed waiter recommended we order one or two per person, plus sides or nibbles.

The slow cooked leg of lamb (£11) was good, but slightly overpriced for the portion size. It featured four slices of musky meat with a stocky gravy, a smudge of mouse-coloured smoked aubergine purée (bereft of smoky flavour), as well as a little ramekin of caraway seed-dusted, pickled and diced pumpkin. In general, it rocked, and not in the James Hutton sense of the word.

Our braised pork belly (£8) consisted of four pieces of kebab stick-impaled meat, each almost as big as a Rubik’s Cube, and a couple of whole roasted figs. On this black plate, there was also a dramatic swirl of Buddhist orange, but slightly porridgey-textured, butternut squash purée, and two tooth-challenging commas of bubbly crackling. Nice combo overall.

In contrast, the seared ginger and balsamic salmon (£8) was helium light, with three slices of this fish on a “hot and sour slaw” that wasn’t that hot or sour, but was pleasant enough, with chopped cabbage, onion, carrot and other bits of softened vegetation. Nice.

We were also presented with a simnel cake-looking circle of seven perfectly spherical but slightly forgettably flavoured fishy gobstoppers as part of the salt cod dumplings (£8) option. These were slightly dwarfed by their accompaniments – slices of a good paprika-y chorizo, shards of spring onion and beetroot wedges. There were more chunks of that magenta root veg (£3) when it came to our side dish, which was smartly jazzed up by lemon thyme and long strips of grapefruit zest.

We’d enjoyed everything so far, but puddings, not so much.

“Popcorn, ice cream, malted toffee sauce” (£5) was served in a sundae glass. If I tried to get at the sauce at the bottom of the dish, the unseasoned kernels fell out and onto the table. Then, any attempt to get a spoonful of the ice-cream on top would result in the popcorn underneath being displaced onto the table. Happy sweeping, people!

Our rhubarb, buttered toast and custard (£5) was another conceptual fail. The struts of rhubarb tasted fizzy, and not in a marinated in champers sort of way, the “toast” was a stale Melba incarnation and the custard translated as blobs of plain double cream. It tasted like cobbled-together leftovers.

Apart from the final course, the food here is rather inventive, though it doesn’t always taste quite as exciting as it reads.

However, I don’t think the cocktails could ever fail to disappoint – as long as you don’t ask the barman for a Slippery Nipple. 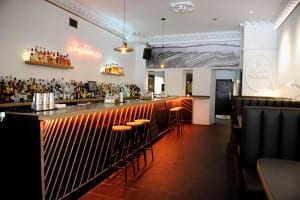 Slighhouse is located in Edinburgh's Old Town. A stone's throw from the Royal Mile, National and Central Libraries as well as the National Museum of Scotland on Chambers St.