9 of the best whisky hotels in Scotland

Whisky tourists make the pilgrimage to Scotland every year, and should you be looking to join them, then don't waste dramming time by checking in to one of these whisky hotels. The Craigellachie Hotel is one of the best known hotels in Scotland, first built in the 1800s, the hotel is a favourite among visitors to the region’s distilleries and fishing spots. It is also probably as well known as some of the distilleries that surround it.

The newly refurbished Quaich Bar will astound you with its knowledgeable staff and amazing collection of malts (there are over 700).

If you’re a foodie as well as a fan of whisky, then you won’t be disappointed as the Craigellachie’s own Copper Dog restaurant named after the devices distillery workers used to steal whisky from casks in storage, serves great food sourced within a 40 mile radius from local hand-picked suppliers and an award-winning chef, it’s the place to go for some fantastic Scottish dishes to accompany your chosen dram.

For accommodation, the Craigellachie offers nothing but luxury with its 26 rooms, which come in three sizes, and best of all they even allow dogs to stay in some of the rooms, so you needn't leave your family pet behind. 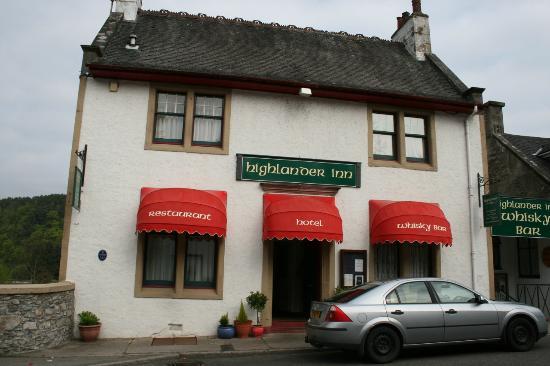 Based in the heart of the biggest whisky-producing region in Scotland, (or the epicentre of the whisky universe, if you go by the rather dramatic tagline on the Inn’s website) The Highlander Inn is more of an institution than a bar.

It's owner Tatsuya Minagawa, is truly an icon in the industry and to some people is as big a draw as the bar's collection, and what a collection it is, with 400 different whiskies, including a large number of single cask malt whiskies –  it is a must see.

Interestingly, the bar also claims to have one of the largest selections of Japanese whiskies available outside South East Asia, and with a patio just outside the bar, there’s a perfect place for you to enjoy a cigar and a dram on a warm and dry summer night.

For accommodation, they have eight en-suite bedrooms, as well as an additional house for bigger parties just 35 metres from the main building. Situated in Campbeltown which was once a thriving Mecca of whisky production – the Ardshiel Hotel is probably one of the first names anyone will give you when asked where to go in Scotland to drink whisky.

Originally built in 1877, for one of the many whisky barons resident in Campbeltown at that time, the Ardshiel Hotel is now a popular family run hotel.

The hotel’s Usquebaugh Bar and Lounge, which offers a superb choice of over 200 malt whiskies including a fine selection of Springbank, Cadenhead, and Islay malts, is the place to go for whisky lovers.

We recommend checking out the hotel’s freshly caught seafood while you’re there too. A 25 bedroom hotel since 1947, the castle  – which is within easy reach of a number of leading whisky distilleries in the North Highlands, such as Balblair, Glenmorangie and Dalmore – has built up an impressive reputation as a Whisky destination.

Currently listed as Whiskybase.com's Number One International Whisky Hotel and a previous winner of the Scottish Licence Trade News Whisky Bar of the year, the bar at Dornoch Castle Hotel is home to one of the best collections of vintage and rare whiskies available to buy by the dram anywhere in Scotland.

Only an hour north of Inverness, the Castle has also begun constructing its own micro-distillery on its grounds, with production set to begin this month.

The biggest draw for Meldrum House is not its stunning design, first class service or the world class golf course, not it's the stunning cave bar.

At nearly 800-years-old, the bar is wonderfully atmospheric and feels like a smugglers' den, it's the perfect place to enjoy a dram and with nearly 120 whiskies, you'll be spoiled for choice.

Best of all, the hotel sits close to Glen Garioch distillery in the nearby village of Oldmeldrum, which runs daily guided tours and rumour has it there could even be another new distillery close by soon too.

Meldrum House has a wealth of rooms not just in the Manor House itself, but also in the new wing, the Stables and the Chain Lodge, meaning they have accommodation to suit any occasion. One of the newest hotels on this list, the Station Hotel is giving some if its bigger neighbours a run for their money in both value and luxury stakes.

Newly refurbished by owners Forsyths Ltd (who made their fortune creating the copper stills that help keep the spirit water flowing across Scotland, and the rest of the world), the re-opening of the once, almost derelict hotel, is a great addition to the Speyside region's arsenal of excellent hotels.

The rooms are all designed with whisky in mind, many of the suites are named after Speyside distilleries, and the hotel's bar, the Spirit Safe (which, yes, really does have its own Spirit Safe) has a wonderful little collection of whiskies.

The Glen Grant distillery is only a short walk away, and the Balvenie, Aberlour and Glenfiddich are not much further out either, making the hotel ideally placed for some true whisky tourism. Sporting one of the best beer gardens on our list and also probably one of the best Highland welcomes you'll find anywhere, the Fiddler’s Bar and Restaurant is a multiple award-winning family-run business operated by the Beach family since 1996.

Serving salmon, beef or game as well as award-winning haggis, you’ll be spoilt for choice when it comes to great food  (they even have a whisky lover's menu).

However, it’s the whisky selection and service that will really get your attention. Check out their Top Ten Desert Island Drams list for a choice of great whiskies that the staff will happily recommend or kick back and enjoy their famous whisky library which includes nearly all the named Scottish single malts.

For those of you who are just starting out on the journey to whisky enlightenment, the bar offers triple tastings and whisky flights to help advise you on where to begin. The Fiddler’s also happens to be on the ‘Great Glen Way’, a 73 miles walk that runs from Fort William, in the west, to Inverness, so you’ll have no excuse not to visit if you’re taking part.

Should that you be tired after all that walking/feasting/drinking, you’ll have a more than comfortable place to lay your head for the night and all for the great value price of  £55-90 a night. It would be remiss of us not to include the Islay Hotel, or Islay for that matter, as it is truly a must visit for any whisky fan. Nestled in the fishing village of Port Ellen (another name synonymous with whisky) the hotel looks out over the harbour and has 13 rooms, a restaurant and of course a whisky bar.

Sporting a collection that will make any Islay whisky fan go weak at the knees, including everything from island staples like Laphroaig and Ardbeg, to new (Kilchoman) and silent (Port Ellen) Islay distilleries.

Don't worry there are plenty of other regions on offer and the staff will be more than happy to talk you through any parts of the collection you fancy.

There's also plenty of great food to try, again all ingredients are sourced locally and if you haven't tried them then we recommend the local Langoustines, little bits of seafood heaven on a plate. One of the most palatial hotels on this list,you'd be forgiven for thinking the Torridon was a castle with its soaring turret and pointed roofs, and the surrounding scenery all 58 acres of it do little to dispell the notion.

The service inside is a match to the opulence of its exterior and its 18 luxurious en-suite bedrooms are perfect for those looking to enjoy a highland retreat.

The hotel is a favourite stop on the North Coast 500 and the restaurant serves some truly excellent Scottish cuisine but it's the whisky bar and its 300 strong whisky collection that is the true star of the show.

• The Stirling Highland Hotel is within easy reach of both Glasgow and Edinburgh and has its own whisky shop on site.

• Set on the coast of the Island of Jura and across the street from the Isle of Jura Distillery, the Jura Hotel is a wonderful place to stay in a wonderful setting.

• The Ship Inn in Stonehaven, rightly prides itself on its excellent little bar and stunning collection  of over 100 whiskies.

• The stunning Victorian-era Glenesk Hotel offers no less than 1000 bottles on display with a choice of over 400 to purchase a dram from in its 360° bar.